My Coach would be the first to tell you that “There is NO OFF-SEASON”, but at the Forefront of the Trainin’ Season, one does usually take in more calories. That said, when I make oatmeal it’s typically with plain, unsweetened soy milk, almond butter, banana, dried cranberries, dried cherries, almonds and walnuts. YUMMY!!

But, I wanted to see if I could add more protein to it. So, I had the idea to whip up my egg whites (like I do for my Breakfast Cloud recipe) and blend them with the oatmeal. 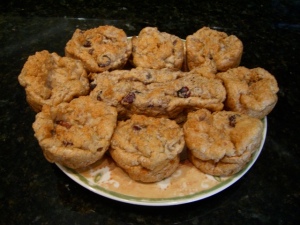 Okay here’s how to mix’em up….

Prepare oatmeal by mixing 2 cups water to 1 cup of oatmeal. Get that boilin’ and then turn the heat down to low and put a lid on it for 15 minutes.

While that’s cookin’, whip up 7 egg whites with a hand mixer until they peak.

When the 15 minutes timer for the oatmeal goes off, remove from heat, take off the lid and add the following:

Stir all of the above into the oatmeal. Then FOLD in the whipped up eggwhites until they are just blended into the mixture you just created.

Spray non-stick cooking spray or place muffin liners in a muffin pan and then fill each section with this muffin batter.

Bake at 350 degrees for approximately 30 minutes.

These muffins are light, fluffy and mighty tasty!! ENJOY!!

Til the next post….Lift Hard & Keep your Fork Lifts Clean!